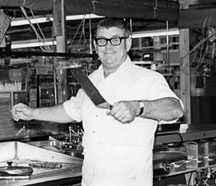 Charles A. Thompson
Things didn’t go quite right somehow, during a routine childhood procedure I developed bleeding or something and almost didn’t make it.
When I awoke, the first thing I saw was my father’s face.  He stayed with me, made sure I came through.  Then he taught me a great deal about how to get things done.
To this day, my guiding force is “What would Dad want me to do?”

Don Carr and Phil Lansdale
Phil Lansdale hired a ninteen year old living in Laguna Beach who decided to make something of himself.  Phil’s door was always open, and he tought me everything I needed to know about the advertising agency business.
Once I made a mistake that cost 4day Tire Stores around $10,000.  He and partner Don Carr were as understanding and forgiving as anyone might be in those circumstances.  Phil said “Well don't worry Steve, there are things I did when I was sixty-nine that I wouldn’t do today at seventy.”

Academy Award Winner Cliff Robertson
On the day I met Cliff Robertson he asked me “Where were you born Steve?”  He put me at ease immediately.  I had to take him back to his hotel in Philadelphia, he and I got into a Cadillac STS rented by the producer.  I said “You’ll have to bear with me Cliff, I drive a Mustang.”  He said “So do I Steve.”
Over the next nine years Cliff’s door was always open to me, and I learned everything I needed to know about the movie business from Cliff.
Cliff Robertson was a genuine gentleman.  He was the most grateful person I have ever known.
There was nothing quite like checking my business voicemail and hearing “Hello Steve, this is Cliff . . . “
I learned as much through observation of Cliff as I did through asking him questions.
Three years ago we met up at East Hampton Airport for an interview with a Swiss journalist, where he proudly showed us his Beech Baron.  After the journalist took some photos, and I helped him return the plane to the hangar, he complimented my flight crew skills (which of course I had only learned that day!)
We drove to the town of East Hampton for lunch, and we followed him in his ’68 Mustang with “Beverly Hills Ford” framing the license plate.
I will miss Cliff, as will many, many others.
But Charles A. Thompson, Phil Lansdale, and Cliff Robertson haven’t gone completely.  They leave behind the gifts they graciously and generously gave.  Those parts of themselves that they gave freely, which have become a part of me and everyone else they touched.
The world is a better place because of these men.
Steve Thompson
September 11, 2011
Posted by Stephen C. Thompson at 3:42 AM 8 comments: