Like so many other German cities and towns, Wetter was robbed of its most priceless treasure by the Nazis; its Jews. Recently the town has resolved to reclaim that treasure. In a five day long ceremony – culminating in the rededication of the old synagogue as a cultural center for learning and understanding – the town of Wetter is honoring its remaining Holocaust survivors and their families from around the world. Follow Harry Weichsel and his family as they attempt to bridge the generational gap on this incredible journey of cultural and spiritual rebirth, in Wetter: Robbery of the Heart.

This is no longer a "small little" independent film done out of a few bucks, sweat and tears... although these factors are still involved in production, now we have the big boys in Hollywood co-producing with us!

Equilibrium Entertainment, a reputable company that was involved in producing such films as CHICAGO and 3000 MILES TO GRACELAND joins us to make this project happens - because, as the "Senior Vice President" of the company said to me from across the table "I like you, and I like this project!" - and I said "cool".

Anyways we also got an A-list special effects dude who works for Marvel and is currently doing effects for the new THOR movie to work for us for free - if you ask me why would a dude of this caliber work for me for free - my answer is: "don't know, but its ... cool" - anyways everybody loves the script and the team, and that IS the reason why we are getting such amazing professionals to join the team - so in fact I do know the answer to the above question!
Posted by Guile at 3:28 PM 1 comment: 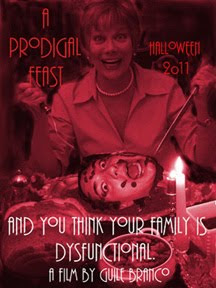 And you think your family is dysfunctional!

A Prodigal Feast is a tale of love and betrayal with an S & M twist. A dark comedy of what happens when relationships go dismally awry. A schizophrenic mother loses her mind; while a loveable immigrant finds true love until All secrets will be revealed at the "FEAST"...

Both sickos and psychos will love this movie. Which one are you?

Posted by Stephen C. Thompson at 3:14 PM No comments: 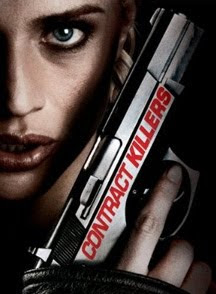 Please let me know if you would like to speak with producer G. Anthony Joseph or any of the cast members.
Posted by Stephen C. Thompson at 4:41 PM No comments:

Dubai filmmaker Olga Sapozhnikova will be attending NATPE promoting her fascinating short film "Hidden Beauty" which was recently a Market Recommended Film in the Dubai International Film Festival Market. She also has several projects in development.

An insightful documentary not only on the beauty of Arab women, but their inner strength as well. The film is a portrait of four fascinating women who the director calls her "heroes": Three Arab women who have flourished in the traditionally male dominated Arab society, and a fourth who tells her story of moving from her native Finland to Dubai, UAE to find an Arabic man to marry, while embracing Arabic culture in the process.

One of her "heroes" is Jamilya, who is the only woman in United Arab Emirates working with four hundred men in an ambulance service. Jamilya has saved many people from fires, accidents and collapsed buildings. Her story was so inspiring, that the ruler of Dubai: His Royal Highness Sheikh Mohammed bin Rashid Al Maktoum, came to her home to personally express his gratitude for her service to their country. (An event depicted in the film.) As the single mother of five children, in "Hidden Beauty" Jamilya shares her opinions on the beauty of women, especially Arabian women.

You can download a copy of our current press release on Olga's page at CinemaNewsWire.com
Posted by Stephen C. Thompson at 11:24 AM No comments:

"The Map Reader" from Arkles Entertainment

Last year I learned about "The Map Reader" while the film was out on the festival circuit. Producer John Davies sent me a screener, and I absolutely loved it!

I love films that take us on a personal journey, like "The Shipping News" and "An Unfinished Life." Produced in Aukland, New Zealand, "The Map Reader" is the story of sixteen year old Michael, influenced by his "friends," driven by his heart, and forced to decide how to live his own life.

This film deserves to enjoy a substantial audience.

For more information and to view the trailer check out the film's page on Cinema News Wire.

Check back for updates!
Posted by Stephen C. Thompson at 3:35 PM No comments:

My intention is to provide independent filmmakers with an inexpensive way to connect with entertainment media.

Whenever a producer who has been selected to participate in our On the Horizon or Festival Circuit programs would like to publish a message, the producer can add their message to the blog, along with a link to their own site and their pages on Cinema News Wire.
Posted by Stephen C. Thompson at 10:12 AM No comments: