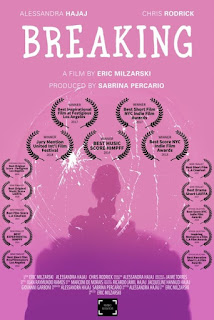 (June, 2018 – Los Angeles, CA) Actress Alessandra Hajaj had an idea for a movie.

Most people with a passion for producing a film quickly learn that moving from concept to finished film is a challenging task, even for the most experienced professionals. So Alessandra turned to her friend Sabrina Percario, who is both a SAG-AFTRA Actress and a Producer at Percario Productions. Alessandra had worked with Sabrina on a few projects, and Sabrina has produced several award winning films, including Julia, a semi-autobiographical film about the relationship with her mother, and making difficult career choices.

The result of their collaboration is Breaking, the inspiring story of a porcelain doll who overcomes her fears to break out of her snow globe.

And now their film is gaining momentum! So far Breaking has won Best Short Film at the NYC Indie Film Awards, Best Inspirational Film at the Festigious International Film Festival, and many, many more!

“Everyone is talking about abuse these days, but most people don't have a precise definition of it. I wanted to create a film that would address abuse with an innocent’s point of view. Many victims are children, and adults tend to avoid the issue to preserve their childrens’ innocence. What they don't realize is the fact that they are not protecting their children, they are leaving their children unaware of the danger and exposing them to it. So I've made this film for them, so children and people from all ages can be aware of what can happen, and if it does happen to them, they can develop the courage to break out of the situation.”

On working with Sabrina, Alessandra adds: “Sabrina is a great friend and professional. Her experience in the industry was crucial on the process of Breaking. She helped me prepare, organize and execute many tasks in which I had no experience. She is a great producer, great actress and she has a lot of potential.”


Sabrina was attracted to the project not only because Alessandra is a good friend, but because she also admired Alessandra. "She's super talented and wears so many hats on set, plus I know I can count on her. When she asked me to produce Breaking, I was very touched by her story and theme.

Everything went smoothly during the pre-production, production and post production. It took us couple of months to pre-produce. Alessandra knew exactly what she wanted for location and cast, so my job was easy to bring together the best crew I could assemble. Everyone was so on top of their own departments, and we had a very respectful relationship between coworkers. That is my goal as a producer: to bring together the best crew as possible, not only talented people, but people who work well with everyone, bringing a very pleasant atmosphere to the set.

This film is very important to us because it is our way of working to bring awareness of those who have suffered from sexual harassment. Our film approaches the subject in a poetic, innovative and beautiful way, so people from all ages can see it and become more aware.

It was one day shoot and at the same location we had a green screen room and the bedroom set. For post-production process, again, everything was amazing. Our editor and VFX guys helped us improve the film, we are grateful for their valuable contributions. We also had a very talented sound mixer and composer Marconi de Morais. The music in the film is original, and is the key element that drives the story.


I can't wait to work with Alessandra again!"

Alessandra Hajaj was born in São Paulo, Brazil with a passion for the arts. She studied fashion, dance, singing and performing arts. Alessandra earned a Bachelor in Fine Arts from the New York Film Academy, and has worked in several creative capacities, including Production Designer.

Alessandra has another short film entering festivals, Chop Shop also directed by Eric Milzarski, where she was the Executive Producer and Production Designer.

And in the near future, she would like to find investors to make Breaking into a feature animated film.

Sabrina Percario is also from Brazil and has lived in LA since 2014, so a collaboration between the two of them was a natural!

They have submitted Breaking to several more festivals taking place between now and the end of the year, and will learn in the next few months which festivals will be screening Breaking.

At the moment Sabrina is working on post production for I.C.E CREAM, a film she produced with Foxter Production Company, which will be out on the festival circuit beginning in May. She is also working on In Search Of, and FriendZone, both feature films she is producing with Touch A Life Productions.


So the next time someone asks "Where are the next great emerging female film producing talents?" look to Alessandra Hajaj and Sabrina Percario.


Alessandra Hajaj and Sabrina Percario are available for interview by appointment, pending availability.