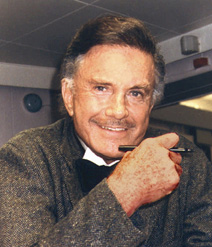 Over lunch in the Hamptons aviation journalist Robert Sirdey asked Cliff Robertson how he decided which roles to accept.  Without hesitation Cliff answered "I wouldn't do anything that my granddaughter couldn't see."

That's what I figure is the logline for our documentary project: "What Cliff's granddaughter should see."

Cliff Robertson was a talented actor, a skilled and accomplished aviator, and an astoundingly kind man.  He helped countless people.  He gave two time Academy Award Winner William Goldman (Butch Cassidy and the Sundance Kid, Marathon Man, All the President's Men, and many, many more!) his start in the film business.

He stood up to studio chief David Begelman, sacrificing his career, rather than his integrity.

He deserves a tribute to his life and accomplishments, and that's what I intend to produce.

Director / producer Brian Gillogly (Accidental Icon: The Real Gidget Story, in which Cliff appeared) has agreed to direct the film, and my own attorney Jackie Borock has agreed to provide counsel to us throughout the project.

Developing the project will take a substantial amount of time on our parts, so I have initiated an IndieGoGo campaign to raise $9500 to cover the development costs.

Development activities include: Determination of the best Legal Entity for the project.  Creating a basic initial script outline.  Decisions regarding which films to include, who to contact from each film, who to contact in aviation, and who to contact regarding Cliff's humanitarian work, and of course the development of a more detailed, accurate production budget.

Once the Development funds are raised, I would estimate that it will take us between four to six weeks to develop the actual production plans.

Maybe you knew Cliff too, maybe you admired his performances on stage and screen, maybe you experienced his enthusiasm for aviation, or appreciated his humanitarian work.

Now you have the opportunity to help us produce a documentary that will honor him, creating a lasting record of his achievements.

Please help us make it happen.

Special thanks to our donors for helping us make this project happen.  Still a long way to go, but I believe in all of us who knew Cliff personally or through his work.

Thanks to Mary Jones for having me on her radio show, and thanks to Tommy Lightfoot Garrett for featuring our project on his Highlight Hollywood site.

As our project progresses, we have some initial considerations regarding who we would like to appear in our film:

William Goldman -- Cliff gave him his start in the film business.

We are open to suggestions, and are specifically looking for people who shared aviation experiences with Cliff.