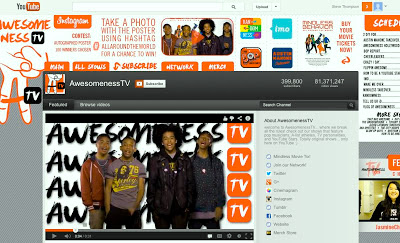 Masterful Use of Social Media:
"From YouTube to the Cineplex"

In Sunday's New York Times, Brooks Barnes tells the story of the rise of AwesomenessTV, a YouTube-based channel for teenagers, that has made the jump to the big screen.

Mindless Behavior: All Around the World opens this week (Friday March 15, 2013) in around 120 AMC theaters. the locations were based on data culled from social networks.

AwesomenessTV is run by Brian Robbins, a former child star who played Eric Mardian on the ABC sitcom Head of the Class.

While the NYT article does describe the masterful use of social media by Robbins and his venture, they didn't mention the role of traditional PR in the process.  The group and film have also been covered by CNN, Newsday, USA Today, and countless other "conventional" news media, which means that someone like me has been working hard behind the scenes to get their word out both in social and traditional media.

Check out AwesomenessTV and see for yourself how masterfully Brian Robbins and his people are using social media to reach and engage their market, but keep in mind that social media is one of many elements in a successful public relations / publicity effort.

Creating a publicity and marketing plan today requires an open mind, and a creative use of all available techniques.

Do you have someone with an open mind, and the necessary experience to keep your efforts on track?  You will if you get in touch with me!

Time is our most precious resource, it's the one we simply cannot recover when it's wasted.  If you get back to me, and we set a time to speak for five minutes, within a day or two I'll be back to you with enough information that will enable you to decide whether or not you want to proceed with me, then neither of us will waste any of our time.


As Always, Thanks for Your Consideration!