Actor Lou D'Amato on Working with Guile Branco in "So Far"

Lou D'Amato is an american actor of Italian descent. 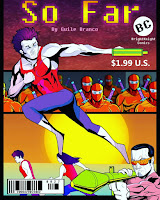 I’m so honored to be a part of this project and look forward to working with him on the next two projects (the prequel and sequel) which by the way, he already has it all in his head! He just needs to get that ole pencil out and start creating the magic that he does so well . . . "

So Far is scheduled to be released online on VEVO and YOUTUBE on June 17th.  It has also been submitted for consideration to a number of festivals taking place later this year.

Announcements about festival selections and screening dates / times will be announced soon.

View the So Far Trailer