(May, 2019 – New York, New York) Noy Marom is a New York City based actress and producer. For as long as she can remember, she has loved to perform.

First, with her sister, designing costumes and performing for friends and family, then later discovering the magic, and power, of how actors tell stories with emotions through theater and cinema.

Born and raised in Israel, she has always loved Natalie Portman, also born in Israel.

She began studying acting when she was in middle school, and throughout high-school. She then took a break for military service in the Israel Defense Forces (IDF) and then  began training at the Nissan Native Acting Studio in Israel. Where she rediscovered her passion for acting, studying Acting Technique.

From there she decided to take the big step of following an old dream to study acting in New York. The idea of studying the technique in the theater capital of the world, going through this artistic journey in the big apple, refining the craft in the city that never sleeps, was the next best possible step for her.

She studied at The Barrow Group and Grace Kiley Acting (An incredible mentor and teacher) both which she enjoyed very much. It was her first experience of acting in a different language and although it was challenging, she found it very rewarding. And then she found The Stella Adler Studio.

“From the moment I walked into the studio, it felt like home. It just felt right.
The atmosphere was so professional, but also very friendly and welcoming and I loved that there were many foreign students walking around, from all over the world.

I auditioned and got in and I did the advanced theater training two year conservatory.

It was a challenging experience to say the least, but I’ve learned so much from so many wonderful teachers and I am forever grateful for this amazing journey.

I think what I was most surprised about is how much it changed me, not only as an actor but also as a person. That’s what The Stella Adler studio is all about. They believe that ‘Growth as an actor and growth as a human being are synonymous,’ and that’s exactly what I felt during my time there and even more so after graduating. Like I was finding my voice. I also really started taking advantage of the cultural richness of New York City. I went to different Broadway shows and screenings, whenever I got a chance to go. You can learn so much about acting from watching different works and different performers.”

The first roles she did were mainly roles in short films. She got a chance to work with wonderful directors and cinematographers and learned how to really work with the camera, along with the differences between film acting and theater acting.

“There’s more to it than you’d expect and you really have to work on it and find the correct balance. I love both equally: the intimacy and power of the camera, and the magic of theater with live audience. I feel very lucky that I have received the great training that taught me and allowed me to do both.”

After graduation, it was time to go out to the real world and become a professional actor. “When you’re just starting out, going on auditions and trying to build your resume, the competition is fierce and it’s all very intimidating. It takes time to find your place in the industry and my Adler friends and I, ‘fresh’ out of acting school, felt that we really wanted to go out there and implement everything we’ve learned. We were extremely passionate and we also wanted to control and own our artistic choices as much as we could, so we created Virago Ensemble.”

“We started working together and found our voice as female international artists in NYC. We’ve had two productions: a staged reading of the one-act play Last Summer at Bluefish Cove by Jane Chambers, and a theatrical movement piece of the short play Kiss that Frog by Serena Cates.

Kiss that Frog was mentioned on BroadwayWorld and our staged reading of Last Summer at Bluefish Cove was reviewed by the Emilia Bjornsdotter, Swedish Actress in New York Blog.

“It was such a wonderful experience to produce our own work, and I was able to learn so much about producing and marketing. There are so many aspects related to producing and promoting your own production. It’s a very powerful skill that I think is very important as an actor.

After a production I believe it’s very important to just let it go, and be grateful for what it was, and what you’ve gained from the experience, then try to move forward and not judge it too much.

I do think it’s always very important to be open minded and remember that you can learn a lot from everyone around you. Especially when you’re working together as an ensemble and throughout the creative process, you really have to learn how to compromise. I will definitely keep focusing on that in future projects.

It isn’t easy to let go of your own vision of things when you’re working on a project with different creative people, but when you listen and compromise and eventually truly collaborate, that’s when the really good work comes to life. When you really trust each other. 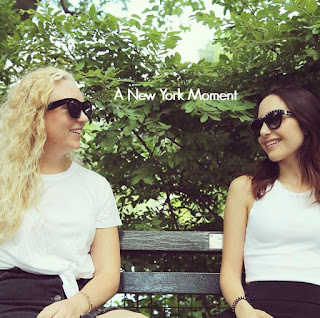 I’ve also used these producing skills when I worked on one of my latest projects, a short film called A New York Moment. It’s a project that’s very dear to my heart. I’ve acted in and co-produced it with my good friend Amanda Erixon, who’s also a part of The Virago Ensemble and studied at Stella Adler with me. We wanted to create a short film together and to share the story of what it’s like to live in a different country and go through the struggles of being an artist. It was a beautiful collaboration between friends and I am very proud of this film. We’re currently submitting it to festivals world-wide.”

Emilia Bjornsdotter describes her role in A New York Moment.

Amanda Erixon has also done an interview on her work in the film.

At present, Noy is mainly focusing on writing new work for future projects and also working hard on refining her craft. “I think it’s so important as an actor to keep learning and perfecting your skills and technique as you move forward. Living in New York has been so inspiring and I feel like I’m learning and changing all the time.

I’d love to focus on new work and to play roles that present powerful, strong, independent women. To tell important stories through theater and film.

As we all know, the business of acting is a very competitive one. It’s always hard to put yourself out there and audition but not get the role. There are rough times when you don’t get work and it’s very challenging to continue to find the energy and positivity to keep moving forward sometimes. But when that happens to me, I only need to think of myself as the young girl that used to play dress-up and put on shows. The young girl who dreamed of living this artistic life and perform on stage and on screen, and then I feel so fortunate that I get to live this life and to do what I love.”

There’s a famous quote by Joseph Campbell from a 1985 interview with Bill Moyer conducted at George Lucas’s Skywalker Ranch in California that Noy really loves. It says: “Follow your bliss. If you do follow your bliss, you put yourself on a kind of track that has been there all the while waiting for you, and the life you ought to be living is the one you are living.

Noy concludes: “I believe in that, and that’s what I intend to keep doing. To follow my bliss and to enjoy the ride.”

How to Find Your Bliss: Joseph Campbell on What It Takes to Have a Fulfilling Life