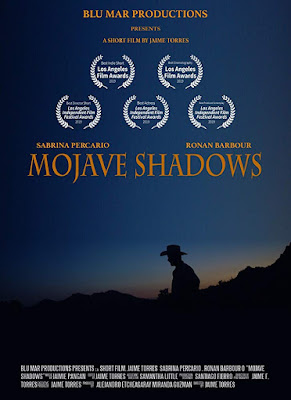 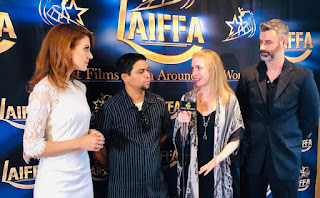 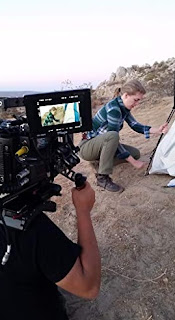 “When I read the script I was a little intimidated by the story because we’re talking about suicide and depression, I had to find a place in me that resonates with those emotions but the good thing about this story is that my character never loses hope. My character Susan Carvalho is dealing with guilty and she’s grieving. She feels guilty about her soon getting killed in a car accident.

Director Jaime Torre and I have known each other since 2014. We did more than five projects together including the award winning films Anguish, Julia, and Tell.

We trust each other, he is open to my suggestions in the script, and he knows how to communicate with me. Because I trust my director, that gives me the tranquility to focus on the scene, allows me to connect with my scene partners, and I can be present in the moment during the scene.

We shot in the desert in July 2018, on one the hottest days (110°F) we were concerned about snakes. Those facts really helped me to play my character, I was actually tired and worried!

When Jaime cast me in the movie, I remember telling him that 'You know I have an accent?' He said: 'Yes, but this story is about this woman going through this journey, anyone can relate, it doesn’t matter where she’s from.' I remember feeling so happy and alleviated.

We need more directors and stories like that, we’re talking about human beings going through different situations and overcoming their obstacles. We want to inspire people and tell stories about people.

Ronan Barbour (my scene partner) and I had a really good connection. It was easy to work with him. He and I have also been recognized as Best Duo on screen by the Actors Awards Los Angeles, who also awarded Mojave Shadows Best Short!

My message to the audience is that there is still hope, and most importantly, I’d like to increase awareness about suicide and depression.”  The film also recently won Best Indie Film and Best Cinematography at the Los Angeles Film Awards and is just beginning its festival run.

Born in São Paulo, Brazil with an Italian citizenship, she fell in love with acting because she could express her feelings through her characters. With time, she realized that being an actress and producer has a big impact in people's lives.

Sabrina is grateful to be very busy these days: Currently she and Quentin Lee Murphy are on film festival circuit with Be(lie)f. Written/produced and acted by Quentin Lee Murphy and produced by Sabrina. A newly promoted detective is put in charge of a murder case that involves the death of a young black man, but he soon realizes his own personal beliefs may interfere with getting to the truth. Be(lie)f is officially selected at OAXACA Film Festival and Indigo Moon Film Festival.

Sabrina also has another film that she produced screening at OAXACA, Freedom, which talks about the current emphatic crisis toward immigrants by showing how the concept of living free with no borders applies to car commercials, but not when it comes to human beings.

El Fred is currently in post-production: A not-so-imaginary childhood friend returns as an unusual vigilante to protect a struggling single mother and her bullied son.

Open Mic just started its festival run: A songwriter struggles to find her voice in L.A. Open Mic is a film is about that young singer songwriter who is living alone, living out of her car, dealing with the stress of making it in a new country.

“I’m currently writing with Marina Lima (screenwriter) Living the Dream a feature film about following your dreams and never giving up.”

Sabrina's purpose is to touch people's hearts, inspire them, and spread a good positive message through her characters and her films.

Sabrina Percario is available for interview
By appointment, pending availability